And so it was after dark on August 31 that we landed at the Freetown (Lungi) airport. We made our way through the airport procedures and on to a bus that said Sierra Ferries on the side. It was a very full bus and we were serenaded on the bus CD player by some American country music crooner all the way to the ferry; a fast drive for twenty minutes along some kind of coastal highway. Then instead of discharging us at the dock, as would be customary for the smaller boats, the bus drove right up on to a large ferry boat. Once inside and parked, we were released to go up on the deck or into a lounge. The best fresh air was on the deck; but there was not much to see since it was quite dark and lightly raining. When we landed, we were driven off and up to the boat office where we were to wait for our transportation to Lakka. We discovered that the enemy had tried three cheap tricks to hinder our progress: 1) The plane was an hour late in schedule, 2) our pickup cars were not there because of a confusion as to when we were actually coming in and 3) one of the cars that came to pick us up got the ignition keys accidentally locked inside of the car. So after two waits, the third wait was while men fished the door open with a wire coat hanger. By the time we were fed and bedded, it was after midnight. The weather up here seems more humid and not as conducive to sleep, although we could be somewhat spoiled by now.

The next morning as we prayed and reviewed the events of the previous day, we are aware of the increased level of satanic opposition that is against us and that is to be overcome. I was asked to bring the opening word and spoke on the war against our souls. Br Burt followed in the afternoon with more teaching on the soul. Immediately after the morning session, there was an unusual event at the meeting. A young couple that had started their life together in a common-law relationship was now saved and baptized and wanted to make formal vows before the fellowship as witnesses. The elders and Br Burt coached them along and prayed for them that the ancient spirit powers would be broken in their lives. They returned for the afternoon meeting.

On Monday, Brs George and Chijioke shared on the condition of our soul and the need for redemption by the Blood of Christ. After the morning meeting, Br Ide gave an invitation and six adults responded for salvation, three men and three women. There has been a fair amount of changes here in this fellowship since we were last here two years ago. In the meanwhile several brethren from Nigeria have been ministering to this little flock and helping to set certain things in order. Br French has gone on to be with his Maker, but his two daughters, Margaret and Tina are here with their husbands, Ron and Bunting. The meetings are still held in the “tent” on Ron’s lawn, but it has been improved quite a bit: a shiny metal roof replaces the blue tarp, a new side wrap and an interior ceiling cover of woven palm panels. What was a dry grass (lawn) floor two years ago, is now a sand floor.

And so the meetings continue, each member of the team sharing at some point, the word speaking mostly to God’s dealing with the human soul. The ministry team now includes three brethren from Nigeria and the meetings will be for six days. Sister Nancy gives a children’s presentation nearly every day before the evening meeting. At every meeting there is translation from our English into the Creole English dialect of the local population mostly by Margaret and they can be made “gladdy-gladdy” in the Lord. And the rain; it rains every day…and every night…often and sometimes quite hard. Someone told us that September will be the last of the rainy season and October will be the beginning of a dryer time. 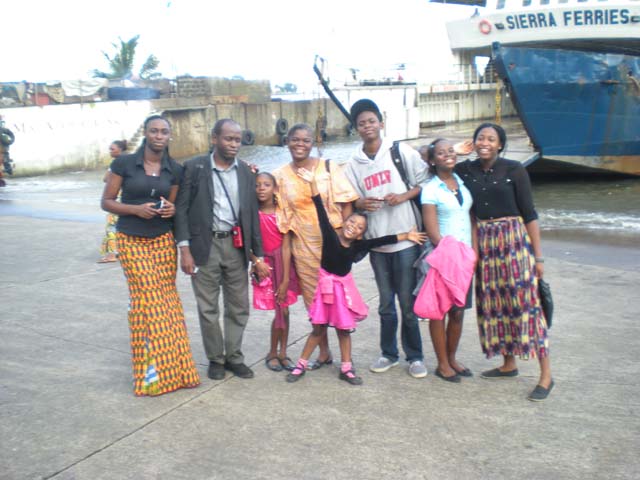 As we approach the final full day of ministry, we realize that this has been a harder ground to plow. And yet, we are encouraged to believe that there has finally been a breakthrough among the local population in grasping the word. We can leave with satisfaction. But we must leave Lakka a little earlier than we had planned. We anticipate trouble with the ferries on Saturday morning, since there is a law in some of the West African countries that the first Saturday of each month must be dedicated to cleaning up the pollution and trash on the land and along the roads. Anyone found on the roads doing any other business is subject to arrest; so we cannot expect ferry service Saturday morning. On Wednesday a group of 8 brethren from Nigeria attempted to leave and were delayed in crossing by a mechanical problem of the ferry being unable to close the loading ramp; consequentially they missed their flight and the plane refused to wait (there were 15 would be passengers on that ferry). Ron has also told us that in this season of rain and stormy squalls, the sea gets rough and the smaller boats will not attempt to cross. So we have decided to cross over to the airport on Friday night, stay in a hotel there and be ready for our Saturday flight. Then it will be a long trip back to Lagos, a reverse route of our arrival here. On Sunday morning, I will leave the team with one of Chijioke’s daughters and fly to Port Harcourt. That evening, I catch the Air France flight to Paris and onward to my home.

Ordinarily I would end the report at this point and simply say that I returned home as stated above; but it requires a little more to be said. The enemy isn’t finished trying to harass us and trying to hinder our preaching of the kingdom message. When we landed in Lome, Togo to change planes, I happened to be one of the first to get in the line for a new boarding pass, which was given to me without any hesitation. But when my four travel mates came to the desk, they were all refused, being told there was no more seats on the plane. So I was told to quickly get on the plane before it was too late. We all cried out to the Lord about the situation. Just before the closing of the door of the plane, the brethren came on to the flight and took the remaining empty seats; the airline had sent a special bus to bring them from the terminal to the plane which still remained parked on the tarmac. Praise God!

Back in Lagos, we were again met by the brethren and taken to Lakki where we will spend the night. In our time of fellowship with the local brethren, they again expressed their appreciation of our visit and meetings held here nearly three weeks ago, telling us of the new life in the Spirit that it gave to the fellowship and encouraging us to continue with our ministry. The following morning, we leave very early for the Lagos airport where we split up, my travel mates going to Uyo for meetings and me returning to Port Harcourt with the young sister Chiamaka. We are met at the airport by Br Hubert, taken first to Br Jokes house to pick up my remaining suitcase and then to the Sunday morning meeting. I am asked to share a word and am so very blessed to see such a strong, thriving fellowship with a group of functioning elders and young people who are actively participating in the praise and worship. After the meeting and a quick lunch, I am taken again to the “tent – temporary” airport and begin my journey home, which went without incident.

On this trip, the kingdom of darkness has been dealt a heavy blow. Souls have been turned to the Lord, decisions being made to follow the higher way. The kingdoms of man’s religion have been shaken, a precursor tremor that will soon result in the complete and final collapse of Babylon. Nigeria is a very changed place from what it was when I first visited 24 years ago. The labor and sowing of the seed by the duCilles and those that went with them has borne much fruit that will remain. That first generation who heard this word are now themselves mature and spreading the message to their neighbors in other African nations, planting the true church of Jesus Christ in many places. There is a cry among those who are just now hearing and believing this word (especially in Liberia), “Please continue to help us and send us quality literature and media that we may grow thereby and teach others.”

Again, we want to thank all of those that have given by prayer and in so many ways to make this visit possible. I should like to continue to encourage you to remember these brethren in West Africa in prayer. I personally want to thank my Lord and Savior for keeping me, giving me the health and strength to endure and for allowing me the privilege to be a part of this voyage. God bless you. 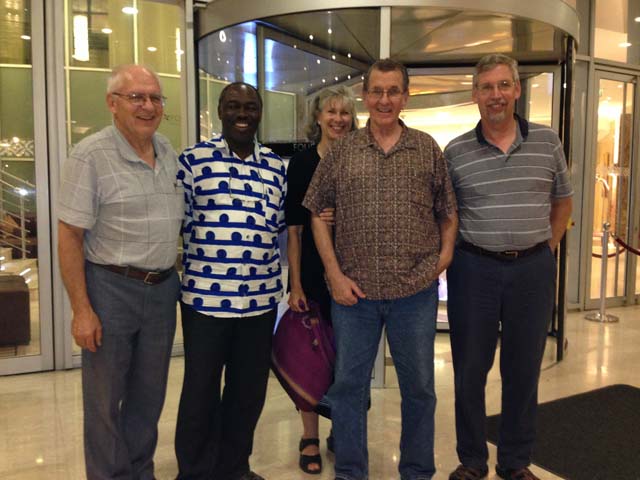