Jim Cassell and I came from our respective homes in Texas and New York, where we met in Atlanta and from there we flew together down to the international Airport in Belize. It was a nice winter day and there were no weather issues, the flights all going well. We landed about noon and proceeded through passport and customs. When I exited the terminal, I immediately spotted a man holding a sign with my name. He was Gershom Rodriguez, the man I had found on the internet who would be our transportation source while we are here. He is the owner of a small van rental company based in Belmopan and he will also be our main driver himself. I had completely lost track of Livanio, the man we had used for travel the last two years. It seems his former employer had suddenly gone out of business and he had lost his phone with our contact information. But about a week or two before our departure, he managed to find me from my web site and made contact again. It was very good to meet with him and his family again in our hotel room on our first Tuesday night. He is currently employed as a security guard.

We are staying again at the Chinese owned Yim Saan hotel, Jim and I sharing one of their large rooms with two king size beds. We can also take our evening meal here, but for breakfast we are taken to the Bull Frog. Brother Livanio (Li) was able to get us in to speak at the same Nazarene Church where we ministered last year. I spoke on the “Wise and Foolish Virgins”. Sister Aura was very gracious to us and has invited us to share again next week when we return from Punta Gorda. 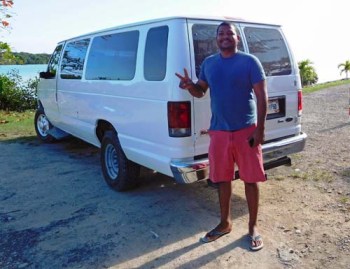 Our Driver and His Van

After leaving the Bull Frog on Thursday morning, we began our journey south to Punta Gorda. What we expected to be a 4+hour travel turned out to be a 3-hour ride, due to a newer and more powerful vehicle to climb through the mountain roads most of the way. We were unable to see the Sleeping Giant since clouds covered most of the mountains. The frequent showers did not hinder our progress. However, a most miraculous thing happened as we approached about half of our destination, at about the Silk Grass Village. Our driver began to inquire about the way of salvation and to admit his need to be delivered from the hold of the devil. We shared a few verses and he opened up and prayed the sinner’s prayer, asking the blood of Jesus to wash him clean and start a new life. He then became a child of God and our Brother in Christ. I believe the Lord designed this whole change of transportation for this very purpose. Praise God!

Upon our arrival in Punta Gorda we had no sure plan of scheduled meetings. As a matter of fact, we had no sure schedule of meetings anywhere in Belize upon our arrival. So, the evening of our arrival here at the Kikuntal Homestay (B&B), after our supper, Brother Val came to meet with us, here at his daughter’s home. We arranged to have two meetings on Sunday at the church and two home meetings. Friday evening will be here at Felix and Annelita’s home (also known as a B&B, Bed and Breakfast) and Saturday night at Brother Val’s home. It seems that there is gradual transition towards the home meetings and a receding from the church setting here. We must follow where the Spirit is leading.

The Friday night meeting was indeed held here at the place where we are staying. It was a small crowd and quite informal. After a few praises, Jim announced that we would entertain questions about the Word. It seems that there is quite an interest in the book of Revelation at this meeting. We observe that the evangelical churches of Belize are finally being stirred. There is a movement in the high realms of government to pass a law forcing the “equal rights” of the LGBTQ people upon the populace and in particular upon the educational system. The churches are desperately praying and fighting against this; so, church people are beginning to awaken from slumber. The meeting was not recorded.

On Saturday, Brother Val took us to his house for a noontime lunch. It was decided that the evening meeting would be at the same place as last night, not at Val’s. There were about twice as many people attending, mostly members of an extended family. I brought a word, “Who are the Sons of God (and is it really going to matter)?” There was an excellent response. I believe the understanding of this end time kingdom message is beginning to hit home with selected ones; with others it is not making an impact. It may be that the Lord will use this location as a foundation for a home fellowship.

On Sunday morning, our driver took us to the small Holy Trinity Church, where I was invited to speak. Since the minister had been asking the people to give a testimony, before beginning with my word, I asked our driver if he had anything to share. He boldly shared how he had come to rebirth in the van with us and how Jesus had delivered him from a life of sin. When we first met him, he told us how his mother was in the hospital in Belize City; he believed her to be on the verge of death. We were planning to go with him to pray for her as soon as we returned back up-north. But today he tells us that she has been discharged from the hospital. Oh, how gracious God is to hear the prayers of a new believer! I brought the word I will name “Ravens, Widows and Prophets”. 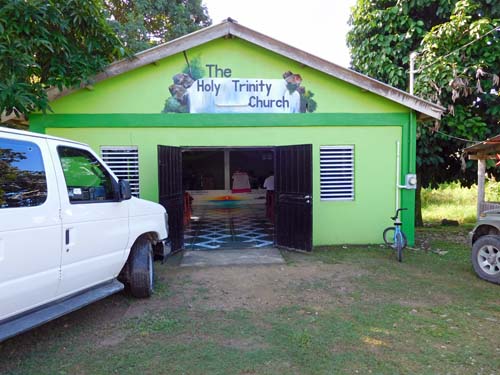 In the evening, we returned to the same place. The meetings are nearly 3 hours long and at the last Brother Jim was invited to share. He read from Matthew of the transfiguration of Jesus and spoke of how it relates to the resurrection. As we were preparing to enter the building tonight in the twilight, we met a stranger approaching the building on foot. He introduced himself as Sylvester, a middle-aged man and a pastor of a local small “Baptist” church in the neighborhood, apparently independent as he seemed to say that the name didn’t mean very much. He shared a song at Emilio’s invitation, and asked no accompaniment; saying he wanted to hear the saints actually sing. It was rather refreshing. I gave him my contact information and I will see if anything comes of it.

The next morning, we packed, ate breakfast and prepared to make our travel back to Belmopan. Before leaving, we prayed for and encouraged Sister Annelita in her vision to host a home bible fellowship at her homestay place. We then stopped at the bank where her father works as a security guard. There Jim and I likewise prayed for and encouraged Brother Val to support his daughter in getting a home fellowship started in their home. I believe that this is the future of any real life of our message in the Spirit here in PG. We are also encouraging these people to seek the baptism of the Holy Spirit; pray with us that Jesus will make this move here.

The trip to Belmopan was a smooth and beautiful ride. When we drove down four days ago, there was much rain and even torrential showers the following day. It appears that there is now a transition from wet weather to a drier time. We were told that last summer was a very hot and dry period with temperatures in excess of 100F. We returned to our Chinese hotel where we settled in and also ate our supper. We had anticipated the possibility of having a ministry at the nearby state prison on Tuesday, but their schedule was full at this time. The contact person encouraged Jim to apply earlier the next time and we would probably have an opportunity for a visit.

On Tuesday morning, we were again picked up to be taken for breakfast. I had called Livanio to ask if he could join us there and he surely was able to do so. He said that he has started a monthly “semi-independent” meeting of the local youth to study the Bible and to inquire into the things of God. We congratulated him in this and also encouraged him to start a regular such meeting for adults and families. This is what we would like to visit the next time we come. We promised to give him spiritual support and counsel any time he needs it. I believe that this is the direction that the Spirit is moving, to truly prepare people for the coming day of the Lord. 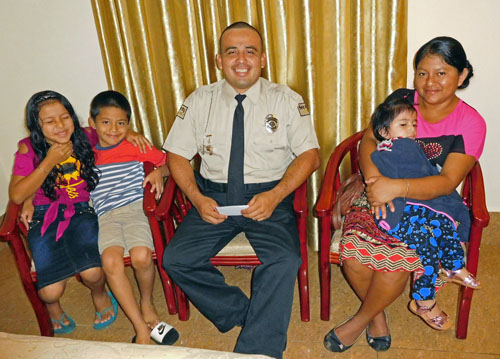 We expected to be taken to the evening meeting at the Nazarene Church, where Jim was prepared to share a word; but we discovered that there was a problem; our driver/owner was in Guatemala and another driver could not be found on short notice. So, we asked Li to give our regrets to Sister Aura. And then the question began to arise about the possibility of also missing our ride to the airport for our departure tomorrow morning. So, we did a lot of praying and asked Li to set up an alternate Plan B just in case. But the next morning (a few minutes late), another driver (Frank) arrived with a van. He took us to breakfast where we also had some last-minute fellowship with Brother Li. And then we were safely taken and delivered to the airport in a timely manner, without any hinderances. When I remember the double breakdown of the van on the way to the airport last year, threatening our timely departure, I am ready to conclude that the enemy does not like what we are doing down here. We must be doing something right.

In final conclusion, Jim and I made it safely home without any problems or delays, very glad to be home. Again, we are appreciative of all the prayer and support given us in this visit to Belize.

Blessing to all,
Mark Jantzi and Jim Cassell 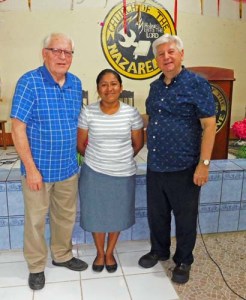