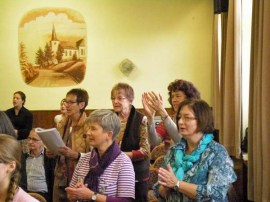 The first meeting was on Friday night. There were three (one of which was a double-header) meetings on Saturday and a final meeting Sunday morning. Brother Matthias and Sister Rebecca were the interpreters; Brothers Jim and Oliver led the praise with guitars and there were five speakers who brought an end-time word for those who would be overcomers. We can all see that the darkness is rapidly coming to fullness; but the Lord has been preparing a vessel of deliverance through the remnant, first-fruits company, who will be able to rise above the coming beast system, hidden under the shadow of the Almighty. There is an urgency for each one to be prepared in this hour, as the time of great tribulation draws very near.

The first meeting brought a word that we are in the days of preparation for a great move of God. From Exodus 12, we see how God used this principle to prepare the people for the Passover and the great deliverance from Egypt. Brother Burt spoke about our personal responsibility and accountability before God from Genesis 1:28 and God’s expectation of us. He later spoke about the necessity of God’s people having a spiritual vision (Proverbs 29:18), lest we perish. Brother George spoke about God redeeming us out of every nation and delivering us by His blood from every familial spirit; he giving specific testimony of the strong Catholic and nationalistic spirits of his own family and his own personal deliverance from them. The final word on Saturday evening, given by Brother Chijioke, was a very rich word that we will all have to chew on for some time. It was a detailed picture of the soul of man that has been in bondage to “Egypt” and through Christ will be able to rise to the height of Mount Zion, the place that Satan would also like to possess. But Zion for us will be God’s possession and it will be his eternal habitation. Our mind will be the mind of Christ. And the Eastern Gate (our mind) is being opened for the coming of Christ. 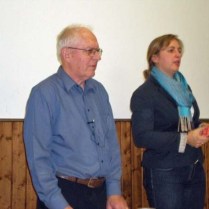 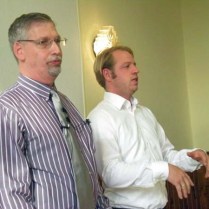 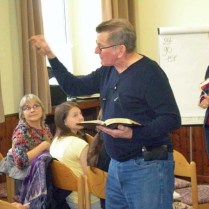 All of the messages have been recorded and are available in digital format or as mp3 CDs. If you live in Germany, you may obtain a recording by writing to Sister Hannelore at hannelore.doerge@gmx.de or if you live in America by writing to gsgerber7@centurylink.net.  A master copy has also been left with Brother Roman in Prague and would be available at marty.o@volny.cz. I urge you to obtain these recordings and listen to them again.

We had the privilege of having several new visitors this year. There was a couple from Berlin, the wife who had ties to Nigeria, and who had been able to make contact with us through finding the German translation of “The Pattern” on the internet and also through a brother from London. Matthias’s father, also from Berlin was here as well as a young lady from Ukraine who had been a guest of the Muellers. 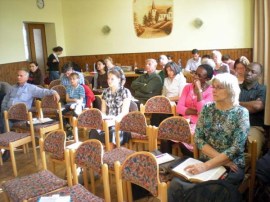 There is a remnant of German brethren here whom we have known and had limited fellowship with for some 20 or more years. These are a people scattered over the land who have expressed to us that this is the word that brings life to the soul and is very much appreciated. They have also expressed appreciation for the young families that have traveled from the Czech Republic. The German brethren have agreed that we must do this again; if we could make any changes it would be to have more time and to do this more often. Below is a portion of a letter we received from a German sister immediately after the close of the conference.

Today I’ll write a longer letter to you and at first want to thank all of you (the brethren and sisters) for the last week-end, which had blessed us so much. It was a really confirmation to all the things I have experienced in the last time. 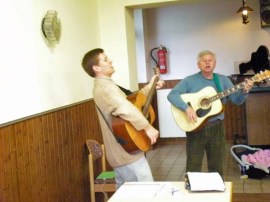 Also the worship was so deep and in one unit that I was able to feel the Lord so near and saw his bright light. I have never seen two men leading a worship so good and deep with “only” two guitars. Also Siglinde and me, we are here alone and so it is a real gift for us to have worship with other Christians. Please tell this also these two brethren (I think their names are Oliver and Jim).

At the end of the convention when you asked the Germans to talk about their feelings, I think we all were so full of thank but also tired inside that we weren’t able to answer in the microphone. So before Siglinde and me came, …I felt so tired inside my body and I had so much to do at my job that I told the Lord, if you wouldn’t strengthen me now, I wouldn’t be able to travel. Inside I felt as if I had walked a long, long distance through a rough and dry dessert completely tired in my body and soul. But then our good Lord did and we both were able to come.

So in my opinion it is so necessary to be close to the Lord in all our thoughts and behaviour. Because it is the last time and I think if we only walk a little bit in the wrong direction – so away from the Lord, also in our thoughts – it will mean death to us like for Ananias and Saphira….

So I also think it is so necessary to look upon the Lord when the darkness is coming closer now, so that we will not sink in the water like Peter did when he looked on the waves and the water.

So I think the Lord has given us a lot and if we are not obedient in little things, it has big effects and consequences for our life.

[…Sister Sabine had much more to share of her personal testimony and the goodness of the Lord in His ministry to her which we could not include here. So we conclude here…]

I think this is really speaking from the Lord to all of us and it is in agreement with the word the brethren had at the week-end.

I’ll stop my long letter here now and I wish you and the brethren all the best for the Czech convention and the Lord’s blessing. I hope we’ll see us again soon, either here on earth or by the Lord.

Sabine from the south of Germany

We again want to thank all of the brethren who have held us up in prayer as we have traveled and ministered. Your prayer and your support have been so important to this mission. After a week in Prague, the team will be joining the Czech brethren for a week-long conference in the north-east of Moravia. A report of this will also be available.

This entry was posted in Germany. Bookmark the permalink.