We landed in Monrovia at about 6 PM, after a nearly 12 hour journey, in which we traveled westward along the capitals of the small nations of the south-western coast of this part of Africa. We discover that this part of West Africa is in another time zone, one hour east of England’s GMT and four hours ahead of New York. As we fly in to our landing, we can see water everywhere, evidence of much rain, and it seems that we will experience our share of it while we are here. The first challenge was faced as soon as we exited the small airport; there was no one around to meet us. We did not know that there were two airports and we were delivered to the domestic one only to have our host, Brother Alphonso Kandakai waiting at the other airport, an hour’s drive away. So with the help of an airport porter, we secured two taxis to take us to the Momba Point Hotel.

The drive to the hotel was quite an eye opener. This small (3.5 million population) nation had been entangled in a civil war for 15 years, which essentially wrecked the economy and the people. The war ended about 9 or 10 years ago; but the devastation is still evident everywhere. At most intersections in the city, I did not see traffic signs; but later I saw a stoplight and a few stop signs, which seem to be taken by drivers as mostly suggestions. The hotel turned out to be very comfortable and served excellent food. Since there was wi/fi (but not very reliable), we were able to communicate with our families and those we need to carry on our affairs. But all that comfort and convenience will come to an end the next morning soon after breakfast.

We again load up in two rental-taxis and strike out for a location in “the bush” where a two day conference is being planned for pastors and church workers. It turns out to be a two hour drive on a fairly good highway, into Grand Cape Mountain County, that we are told is a 90% Muslim dominated region (the only county so dominated), and perhaps for this reason of the environment, there are hearts hungry to hear the word of truth. We are told that Muslims make up about 30% of the total population of Liberia. Br. Burt and I bring the word on the first day. I heard someone say that there were about 75 in attendance. We are able to sense much interest, attention and acquiescence, as we are teaching the word and the Lord is favoring us with a good anointing. 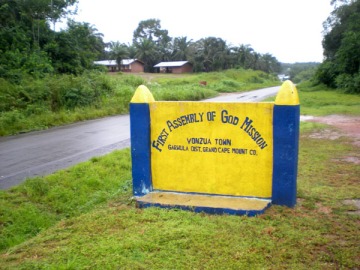 The name of the community is Vonzua and the sign in the front says it is an Assembly of God compound/church. However, one of the brothers said that a Baptist congregation from South Carolina built the guest house, where we will be staying for the next two nights; it is comfortable and secure, but rustic, like the Port Harcourt Youth Camp. The power is supplied by a generator which runs most of the time. It is here that I have come to appreciate some of the extra things I brought with me: a top sheet for the bed, a flash light, and an umbrella; it seems never to stop raining. Where does it all go?

The second and final day of the mini conference is also a very good day of meetings. Jokes started and got into forsaking the darkness of traditions, including religious practices that are not in God’s order. There were many questions, especially about church order. Each one of us ended up having something to share today. After the meeting, we walked up to the guest house and had an evening meal. After the meal, a delegation of ten pastors came to the house desiring a meeting with us. They asked us to please not forget them, especially in the Muslim environment in which we dwell. “Please promise that you will return again soon and can you send us more of your literature.” This is one of the most enthusiastic responses that I have ever seen, after only two days of meetings. We were advised not to expect the same response tomorrow down in Monrovia. 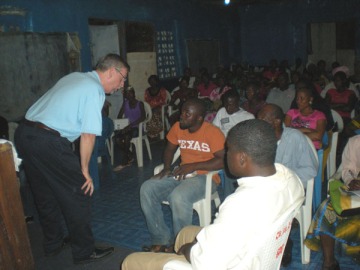 And so, on Thursday, August 29, we return from the “bush” and are back in Monrovia. Br. Alphonso Kandakai has a meeting set up for us at his home meeting place, on one of the back streets of the city. Since I am asked, I bring a word on the Parable of the Ten Virgins to an audience of about 35 and made up mostly of pastors. The brethren said, it was clearly tailor made for this audience. We can only believe the word will not return void. George brings a word, on the God who dwells in our hearts, to a mixed general audience at the next meeting. Since we started the meeting 3 hours late (terrible gridlock on one of the main streets), that also meant getting home and into bed late as well.

The next day is set up in like manner, the pastors and church leaders in the first meeting and the general audience meeting after a short lunch break. The room is full for both meetings. Burt starts the first meeting with a very strong word on the single purpose of God for man. Jokes finishes up the first meeting and starts the afternoon with a teaching on the human soul. After this, invitations for prayer are made by George; one couple comes for salvation and more than a dozen ask for the baptism of the Holy Spirit.

But, the most amazing thing of all is what happened during the lunch break. We were told that a group of pastors wanted to meet with us; so we walked over to one of their nearby church buildings and there we found more than a dozen pastors, representing a variety of evangelical and Pentecostal denominations. They said that this was the first time ever that such a mixed group has ever gotten together in a spirit of unity. Their spokesman said that they wanted to know us better, that they were blessed by the word and that they would like to consider another conference next year. They also asked for more literature and media regarding the message and that they would consider attending meetings in other West African states. We also were able to answer a few of their questions. What a day and what a nice surprise! And what is this wind that is blowing across Africa! All of this Liberian response calls for a lot more laborers to be sent into the harvest field and a call for the disseminating of more literature. So tomorrow, we will move northwest to the neighboring country of Sierra Leone. It will be an evening flight and we are praying for traveling mercy.