Forty-six hours, that’s from the time I left my home in Upstate New York, until I arrived at our hotel in Butuan, on Mindanao Island in the Philippines; and from zero F to the 80s F. But if I am tempted to complain, I can only compare to the mission travels of Paul. It took a lot longer for his ship to arrive at Rome, and as I recall, it was wrecked. And I should be almost ashamed to admit that the hotel is secure and has a comfortable bed here in Butuan. We are here again, in spite of the continuing declaration of martial law and the news that there are still kidnappings and cathedral bombings in the southern part of this island. But this is where God has chosen to plant the seed of His end-time kingdom message. George Herrig and I arrived here from the US on Friday the 22nd; Martin and his daughter, Kristyna, arrived the next day from Prague, Czech Republic. 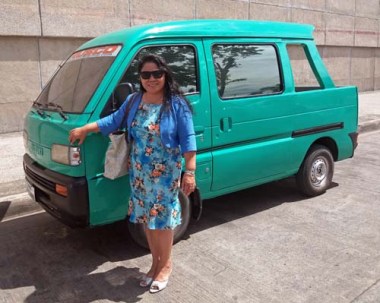 So, while Martin and Kristyna were in-route from Manila to Butuan, George and I were each ministering to a small crowd at two elder’s meetings being held at the Kingdom Message Ministry School (KMMS) in Ampayon, about 7 km east of the city of Butuan; it’s not far but it takes 30 minutes to drive it. And we had the privilege of making the small journey in Sister Merlinda’s “new” multicab, with Brother Lito being the driver for all of our time here. My message at the morning meeting was on the “Beginning of Sorrows (Labor Pains)” and George spoke in the afternoon on “A Pure Sanctuary”. By the time we returned to the hotel, Martin and Kristyna had also arrived and were settled in.

The next day, Sunday, we had only the one meeting at the KMM School at 3 PM. There was a full auditorium crowd of parents, students and KMMS staff. After some general praise and worship, the teachers sang us a special song. Then Kristyna began teaching the small children the parable of the lost sheep, in which she made some very nice drawings on the white board. After this Martin brought a word on “Hannah, the Barren Woman who Became Fruitful”, and the mother of one of the greatest Old Testament prophets. Edmar was again the interpreter. 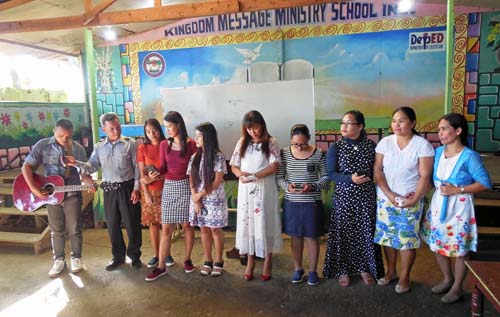 Since we were not traveling up to Jabonga because of the current instability, we were invited to come to Brother Ben’s fellowship on Monday morning and have a “regular” meeting with the people. We were able to recruit Christeline, one of the KMMS teachers to stand in as my interpreter; and I must say that she did a very impressive job. I spoke on “But for the Elect’s Sake”, showing how God is preserving His chosen ones under all circumstances. The other visiting team members were not able to accompany us on this visit, about an hour’s drive from where we were staying. The weather has been very pleasant and dry so far, so our road back into the rice field territory was the best for travel that I can remember.

Tuesday, the 26th, begins our days of focusing on the KMM School. We broke up into two teams: George and I went to each teacher of each class to see how the teaching of the Bible is being carried out. Martin and Kristyna also went to each class, passing out gifts to the students, taking classroom measurements and making other observations that will help us to guide the school into the future. After having lunch with the staff, we also looked into the “newer” building to see how we can best utilize its space and to also determine what work needs to be done during the summer break, starting in late March.

The key activity Wednesday at the KMMS was a teaching session that we gave to the entire group of students for the morning group and repeated again for the afternoon students. These sessions were further divided between the upper grades, which Martin and I took, and the lower grades, which George and Kristyna taught. I could hear some lively singing of children’s songs coming from the adjacent meeting room. What Martin and I did was to create the entire “living” tabernacle, using the students as the walls and pillars. Martin was a poor sinning pilgrim, looking for the way to God. I became an older brother/mentor, showing him the way to the fullness of Christ by going through the salvation steps from the outer court gate up to the Most Holy place and the ark of the covenant (which was my roller-bag suitcase), full of the precious treasures. Our first translator was April Joy, our 7th grade teacher, and the second one was Christeline, our 6th grade teacher. It seemed to be very well understood and the one translator said that she really learned something.

Thursday, the 28th, is the last day of February. The weather has been so pleasant here, 13 time zones from my home in Upstate New York, where Rita tells me it is zero F and it is snowing. Today we go again to the school, where Martin and Kristyna are busy individually photographing all of the students. George and I do some more work on planning for needed summer improvement projects. Then, just after noon, we visited the Department of Education to learn more of their standards for private schools. 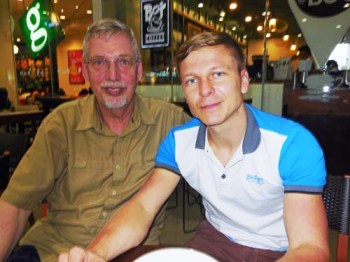 But Thursday was not finished for George and me after arriving back at our hotel. We had met a young Lithuanian man at the airport in Manila, who was also traveling to Butuan with his family. I had given him contact information and a couple of days ago he contacted me and wanted to get together. So late in the afternoon, we met Val at a coffee shop in the mall, right next to our hotel. We all had a lot to share and by the end of the visit, the man had become a new born-again believer in Jesus Christ. We later introduced him to Martin and we expect to remain in contact with him. Praise the Lord!

On Friday, March 1st, we returned to the KMMS for our final visit. We met with the teachers and informed them that we will be going back to all day classes for all students and that we will not be moving up to the 9th grade at this time. We are very pleased with our current teachers and hope that not many will leave for other jobs after the close of the school year in late March. Martin and Kristyna have also finished up the job of photographing each student for our sponsors. Saturday is a free day with no meetings scheduled. 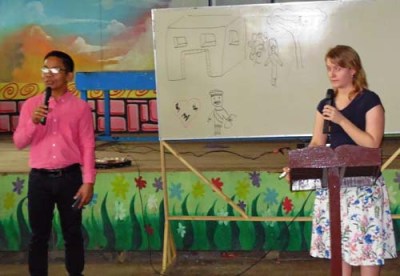 Sunday, the 3rd, is our last day of ministry here. In the morning, we were taken to Brother Lito’s fellowship for the meeting. Kristyna greeted the fellowship and encouraged them in their faith. Then Martin gave the word, speaking on the “Fullness of Baptisms and the Spiritual Gifts”. It is a lively little fellowship. At 3 PM, we were then taken to the KMMS for the afternoon meeting. Kristyna gave a teaching to the children about the story of Zacchaeus and his encounter with Jesus. She made very nice illustrative drawings on the board. Then George gave a message outlining the path that the Lord used to bring him and Susan to salvation. It was followed by an invitation for those who wanted a closer walk with Christ. Initially, about 20 responded by standing for prayer; but in the end all present were standing. It has been a very good day and a very good visit.

Brother Edmar was present at these meetings to translate for the speakers. Sister Medlyn is still keeping their home in Jabonga, but Edmar has taken a job with a construction contractor in Cagayan De Oro City, a five hour drive west of here on the coast. It is a city twice the size of Butuan. During the week he stays with an old pastor friend and goes home when he can on weekends. He told me that other ministers are asking him to bring them the message that we have taught. It seems that the Lord is still scattering the seed and the sowers.

The weather here has been unusually mild this visit, not too hot and not very humid. During the Sunday evening meeting, the first rain finally arrived and you could clearly hear it on the metal roof. After the meeting, we went to KFC for our evening meal. While there, the power in the city went out; it probably had something to do with the rain.

The next day, we began our two-day journey to our respective homes. I have heard from all of my travel mates that they have arrived home safely. It has now been more than 24 hours since my arrival here in Upstate New York. As I look out at my outside thermometer, I see that it reads minus 10 degrees F, quite a contrast from where I have been two days earlier. As I reflect on the trip, I believe that we have made some very positive changes at the school. The quality of the student’s education will definitely be improved by going to full day classes. And now, the teachers will be better able to focus on academic skills with greater emphasis on reading and teaching the kingdom principles from the word of God.

I want to thank every one who is and has been involved with us in our visit to Butuan. Your prayers have surely made an impact, as we have also been aware of the resistance from the enemy of our souls.

God bless you all.
Mark Jantzi with George Herrig, Martin and Kristyna

This entry was posted in Philippines. Bookmark the permalink.