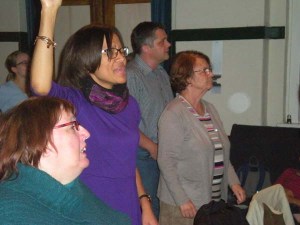 If we can judge the attitude of hell by the resistance and attempted trouble in coming to this conference, one could easily conclude that Satan and the ruling principality (the black knight) must have thought that this gathering was a serious threat to their dominion. At the border crossing there were German border patrol, looking over and checking the car occupants as a result of the recent mass migration (invasion) from the Mideast. Somewhere in this vicinity we encountered a massive traffic jam on the autobahn, delaying us considerably. We learned that the Asbills and Sister Hannelore were also delayed by an even more serious traffic jam coming from the other direction. And then Chijioke’s luggage apparently never left Paris until a couple of days later.

Why does the Devil go to so much trouble if only a handful of German brethren will be present? Could it be because we are coming into his domain, working spiritual warfare by simply proclaiming the word here and making the claim of “everywhere the soles of your feet shall tread”; that this is really going to shake his kingdom and somehow loosen his hold? Berlin is really the seat of Satan for Germany; and an actual “Seat of Satan” has literally been moved here from Pergamos (see Revelation 2:13) and the Ishtar Gate has also been relocated in Berlin. This was also Hitler’s headquarters for his 3rd Reich during World War 2. Yes, there is a lot of dark history here. So yes, we were here to make war with Satan’s strongholds, the grip that he has on the minds and souls of men and it can be destroyed by the power of and in the Spirit. 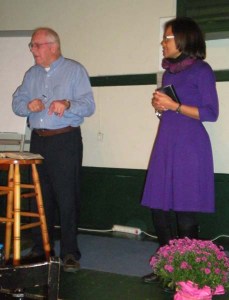 Without my making a description of each speaker and what was said, let me just give some of the summaries and conclusions that others gave me. Rita said that she comes away with the understanding that Christ and our relationship with Him must become a part of all of our life, all that we think, all that we do, all that we say and everywhere we go (Martin’s message). In other words, Jesus needs to be involved in all aspects of our lives, everyday. Another said that they saw evidence of a real breakthrough and they felt that there was a flow of the word among the other speakers; Burt, Chijioke and myself.

The meeting was held at Christian Mission House where we had our meals and some families slept. Others of us stayed in the Bongard Hotel a short distance away. All of our meals were prepared by Oliver, Linda, Eva and their families. God bless them all, it was well done. Czech Conference is next.

This entry was posted in Germany. Bookmark the permalink.