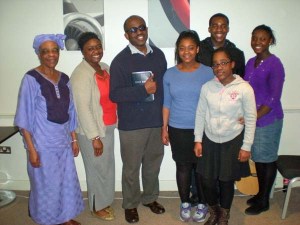 This is about our 4th time for an annual Spring time gathering of brethren in Luton. Our meeting was held at the Ramada Inn and it is within easy walking distance of the Luton Airport, a small international jetport that accommodates mainly Wizz Air and Easy Jet. The conference is sponsored by the fellowship that meets at the home of Kayode and Bola Aganna. Six of us brethren came from the US via Atlanta to Heathrow, London and were transported about an hour’s drive north by Bro Kayode in his car. Others came from Nigeria, Switzerland and Czech Republic. Bro Kayode opened the meeting and said that it should be an open meeting where we can all share and partake of what God is speaking to His body in this season.

On Friday, April 3, Br George Herrig brought the morning message on the invitations to The Great Supper and the Wedding Feast for the King’s son. We are still in the season when people are making excuses and rejecting all that God is offering to His people. We might mention here that all of these messages have been recorded and can be downloaded at Audio – England.

Br Mark Jantzi brought the next two messages that day, first on the History of the Bible and secondly on a glimpse of the martyr’s blood that has been spilled to preserve the purity of the true word of God, which Satan has tried so vehemently to corrupt and destroy. A twelve page outline of this study can be found at History of the Bible – Ancient Words.

The Saturday meeting began with a word by Br Burt Asbill. He spoke on the “False Christs” that Jesus spoke of in Matthew 24. We will have to contend with these in the last days in which the very elect could be deceived. Spiritual discernment is required to know the true and genuine from the false. There will be a price for this discernment.

Br Chijioke spoke on the message that was sent to David when fleeing from Absalom’s rebellion: “Lodge not this night in the plains (low place) of the wilderness (the night is upon us) but speedily pass over (the Jordan); lest the king be swallowed up”… Satan will come upon you when you are weak and weary but you can pass over the Jordan.

Br Ebere brought the final word on Sunday. He spoke of spiritual nakedness and keeping our garments from being soiled. The garment is to (1) cover our shame and nakedness, (2) to protect us from the environment, (3) and for beauty and glory. If we are wearing the garments of the righteousness of Christ, there will be a sweet aroma as the spices of myrrh, aloes and cassia (Ps 45:8).

A Sunday afternoon meeting was held for the youth. About 20 attended and Br Ebere challenged them to make their foundation sure so that in the day of trouble they will be able to stand firm.

The final meeting was a time for questions. We shared an outline of the time line of the crucifixion week as to Christ being in the grave three days and three nights. There is no way there could be a “Good Friday” crucifixion or an “Easter Sunday” sunrise resurrection. Hear the message on the Patmos website. The timing of the birth of Jesus was also explained as to how it could not have been in late December. Br MK gave a brief challenge “Raise the Bar”.

After a final update of current missionary activity, the meetings came to an end. Some of the brethren returned to their European destinations on Monday, April 6. Br Jim Cassell, Rita and I returned to our homes on Tuesday via London Heathrow to Atlanta. Our flight (which was delayed 1 hour in departure from LHR) turned out to be rather interesting. Rita was seated next to an older man who was imbibing rather liberally of the alcohol early in the flight. He began to open up to her in admitting to being a sinning atheist, to which she responded strongly in warning him of the eternal consequences of his choices and beliefs. When she made a visit to the restroom, she bound the unclean spirits in the man. All was quiet until about midway through the flight, when the man suddenly began to shake uncontrollably (like a DT attack). I notified the crew and they called for doctors. Meanwhile Rita and I were moved up to Business Class so they could attend to their patient. It turned out that he settled down and when we saw him in customs at Atlanta he said, “This has never happened to me before.” Then he pointed up and said, “I think He is trying to get my attention.”

Well that wasn’t the end of our adventure. The checked luggage for Jim and ourselves did not show up on the baggage carousel. Since time was running out, Rita and I had to quickly flee from there to catch our connecting flight. When we got to the Albany gate the flight was about half loaded, but we made it home on time and then put in a claim for the lost luggage, which was delivered the next day. Meanwhile, Jim’s flight to Bloomington was cancelled due to bad flying conditions and they put him up in a nearby hotel. But the next day he caught the 3rd flight back and made it home okay.

Again, we thank all the brethren for your prayerful support. And let us remember our brethren who are living in England and laboring to bring the kingdom message where they live.