This trip began for us on Monday, September 12, 2011 as we flew from Albany down to New York City and from there to Paris and then down to Freetown, Sierra Leone. There had been some concern on my part since most of the New York City area had been placed on a very high alert to prevent terrorists trying to celebrate the 10th anniversary of the 9-11-01 attack. It would have been an opportunity for the devil also to interrupt our travel. So we asked our brethren to pray against such mischief and we can say that the Lord answered our prayer. The flight from New York to France was one of the roughest long distance flights I have experienced in a long time.  The plane started shaking almost as soon as we left KennedyAirport and the seat belt sign was on for most of the flight. The Air France pilots must have been very glad to leave that plane in Paris.  It was not for that reason but just because it was another all night flight that we only got about an hour’s sleep. The dawn landing left us plenty of time to catch the next flight. So we went to the lounge and waited in hopes of meeting Brother Burt Asbill. When he came we had a lot to catch up on. The flight to Freetown made a very short stop in Conakry, Guinea and then another quick hop on to Freetown.

The scene at the airport is quite typical of landing anywhere in Africa, but is something you have to experience to really understand. The second you come from the secure zone into the baggage collection area you are mobbed with solicitors vying for the job of transferring your baggage (for generous tips of course) and also to steer you to the water taxi service that they represent. Burt was a minute ahead of us and he immediately found the right man who worked for the hovercraft taxi service.  So I had to reject the considerable pressure of the other suitors. After leaving the airport building we were escorted to another building where they collected our fees for the boat ($60 each) for the one way trip over the “bay” to the city wharf.  Then we were packed into a bus (25 in ours) and taken on a very rough road down to the water front. Here, as we had been instructed by Brother Ron Johnson, we boarded a large hovercraft which was actually parked on the land at the shore. This big machine had four large diesel engines, two which raise the boat about a yard (meter) above the water and two which turn the big aft wind turbines for directional propulsion. The trip would take about 30 minutes to cross.

On the other side Brother Bunting Johnson was waiting for us and drove us without incident down to Lakka. The road is still unfinished but we did not run into the traffic problems we had encountered previously. When we got to the building (the tarp covered frame “tent”) the first meeting was already underway. Brother Ron Johnson (son-in-law of the elder, brother French) was speaking. The brethren graciously excused us early for a meal in the house and then a drive over to the McEwen’s where we would be staying. As soon as we unpacked the essentials and hung a few clothes I believe we simply melted into the bed’s mattress.

The next day began the main part of the meetings. There are to be two long meetings each day, starting after breakfast at 10 AM and ending before dark. I was given the first meeting and Brother Burt the second. Sometime in the early afternoon the four brethren from Nigeria arrived: Chijoke, his 17 year old daughter (Ozichi), Ebere (from Owerri) and Urias (who finished off the afternoon meeting with a teaching).  We are meeting in the same structure that we met in the previous two visits, located in the yard of Brother French’s house; the only difference is that instead of a grass/sod floor it is now all beach sand. We take our three meals in the house (as do most of the attendees), being transported morning and evening from the McEwen’s home on the very rough street. It is the rainy season here and the rain has not been good to our road. At night we can hear the rain coming in torrents. It also rains on and off during the day time. The McEwen’s house is almost new but it does not have the same amenities that we have at home. We mainly miss the running hot water. They have a water Storage tank on the upper side of the property (the house is on the side of a very large hill of almost solid rock) that is periodically filled by a truck tanker (they do not have a well). But there is no hot water tank. Each morning the young man who tends to the house delivers a pail with about a gallon of hot water. We may use this or choose a cold shower. I believe this is a far greater luxury than the folks have who live in the village and some of the neighbors here in their little tin shacks. Many have no running water and no electricity. The McEwen’s have a generator which runs our floor fan until about 2 or 3 AM when it shuts off, probably from lack of fuel (I awaken a little later drenched in sweat); then it is started again about 6 or 7 in the morning.

The meetings have been good and there has been a good spirit of praise. The praise was particularly good Thursday morning when the congregation (50-60 brethren) were singing about the Blood of Jesus. It brought forth a prophecy followed by much good word; the theme being God’s ability to protect all who come under the shadow of His wings during the coming great tribulation. We are also aware of considerable spiritual resistance from the devil’s camp. Nevertheless, about a half dozen men came forward to an invitation to accept Jesus as their Savior. There are attending these meetings a certain number of new people who have never come to this fellowship. We met two men on the break, one who said he was from the next neighboring village and had been attending another fairly large charismatic fellowship. The other fellow said he was from the next village beyond that. There seems to be quite a number of churches in this area (an abundance of religion). Then I also met a man (Alphonso Moses Kandakai) who said he was from Monroviain Liberia (another West Africasmall coastal nation). He said he was a pastor and he intended to attend all of the meetings. Thursday night it rained in great torrents such that I wondered if the brethren would be able to drive us back up the road to our lodging. We all said that we slept well that night. There were far fewer mosquitoes biting us in our room than the night before, probably because Geraldine ordered our room to be sprayed. She said she will do it again tonight. We do not want to give in to the fear of the plague of malaria. Nevertheless we are taking prophylactic drugs.

The Friday meeting began with Brother Ebere bringing the word on a living sacrifice. The response to Brother Johnson’s invitation to present ourselves as a living and acceptable sacrifice to God brought nearly all of the adults of the local fellowship forward.  Then again in the first afternoon session Chijoke spoke first about Babylon and then began to rebuke the spirit of poverty in this place. Again all of the local adults came forward in prayer and agreement. I followed with the word to Flee from Babylon. It was followed by a lively period of questions. Then about 8 PM we were taken back to the house for the last meal and a little more fellowship.

In the morning after breakfast and before the meeting we found ourselves in an impromptu meeting with the local elders and an opportunity to give counsel and advice to a fairly new fellowship. At nearly 11 AM we went into the meeting and Chijoke brought a goodly teaching relating to the holy place of the tabernacle with the human soul. It is made clear that the holy place is only a temporary place and we must plan to flee through the veil (our flesh) into the most holy place. After a late lunch the main group walked about ½ mile down to the beach where about 16 persons were baptized in the water, evidence of their growth. Meanwhile back at the house a couple of us met with the pastor from Liberia, who told us he would like to bring us to his city, Monrovia. Let us pray to see what God will do in this regard. The late afternoon meeting was to field questions from the listeners. Brother Chijoke ended up giving a very good word on tattoos, dress, hair and the presentation of our bodies as the temple of the Lord. About 8 PM the meeting broke up and we were taken in the Nissan Pathfinder back to the house for the meal and the night. 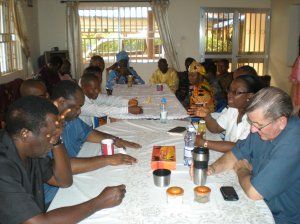 The Sunday morning meeting also began with an elders meeting around the breakfast table. There was a discussion about some who had participated in traditional marriage ceremonies, thus giving their vows over to the influence of demon spirits. At the beginning of the meeting several couples took back the ground given in traditional (and other non-Christian) ceremonies and reaffirmed these vows under the Blood of Christ. This included a young couple who had had a Muslim ceremony and another older couple who had been married under Roman Catholicism.  Another couple came forward who wanted to change their surname. Each one received the blessing of the local fellowship. At the last brother Burt brought the word “God Wants Sons.” We are very satisfied with the response of this fellowship in desiring to lay hold on the word of truth.

Monday was a day of rest and fellowship. We were joined at the meals with many of the local fellowship. On Tuesday we were driven to town by Ron Johnson and put on the Sea Coach Express, a relatively small but very fast water taxi which delivered us to the airport. The return trip was about 30 hours of travel but we made it home without incident. We are very thankful for the prayers and the provision that God has made to give this opportunity to preach the gospel of the kingdom of God to all of the world. We believe that this trip was a good success in bringing maturity to a quite young fellowship.