I have not been keeping minutes or any sort of a diary of the three weeks that contain these two concurrent conferences, so this will be more of a summary from my memory of what has transpired.

The German Conference was held again in Berlin on the weekend of October 18-20, 2019, at the same location as last year. I left home on Wednesday the 16th, which gave me only one day of recovery from jet lag before our travel to Berlin. The Cassells and the Asbills also attended this conference from the US and I believe left a day or so earlier than me. Rita was unable to accompany me this time as she is at home ministering to a 10-year-old grandson, who is residing with us for a little season and attending school in our rural community. 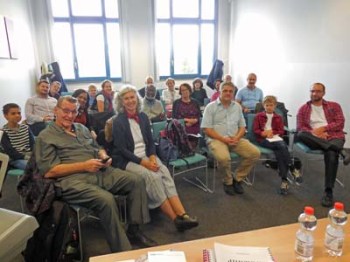 We were able to travel by car with three other families who travel from the Prague area, namely the households of Brothers Martin, Radek and Oliver. We were joined by a couple of German families living in the vicinity. In addition, Brother Sia and Sister Merlinda drove there from Switzerland. The message that I remember well is my own word regarding our Coming into the Mind of Christ and Martin’s word on Spiritual Seeing Versus Spiritual Blindness. There was also a testimony by Sister Stephanie’s father of some of the tribulation he has experienced in Nigeria. After the meeting, we drove back to Tursko, where we will dwell for one week until the Czech Conference.

The Czech Conference is held again at the Kraskov Hotel, about a two-hour drive east of Prague, the same location as last year. Incidentally, this is the same hotel we met at 17 years ago, although it has undergone major renovation. We arrived by cars on Sunday afternoon, October 27 and we leave in the same manner exactly one week later, November 3, 2019.

Since I do not plan to give a detailed report of each meeting, I will try to summarize what I see to be prominent themes of the word, as well as some of what I consider to be highlights. We held two basic meetings each day, one in the morning and one in the evening, with the afternoons free for recreation and socialization or special small group meetings. One such special meeting was held on Tuesday afternoon, in which the children and youth presented a concert for the benefit of the KMM School in the Philippines. Under the direction of Sisters Misa and Kristyna, the various age groups of young folks gave some great presentations of talent in music. You can probably hear the concert on the Patmos website and enjoy some of the photos there. It is so good to see the joy of the Lord reflected in the countenance of these dear young ones and to hear their sacrifice of praise.

Another noteworthy addition to the conference was the visit of Emanuel Benda, a 93-year-old man who shared the word and some of his testimony on Wednesday morning. This is a Czech man who has been a minister of the gospel and an evangelist. The Czech brethren discovered him at their summer youth camp and consider his visitation to be a special gift, even at this one meeting in Kraskov. 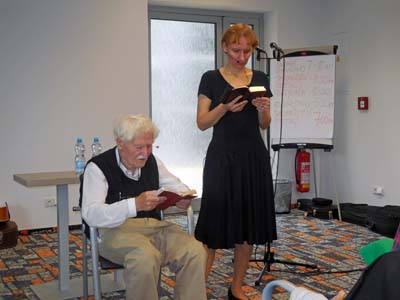 I heard several ongoing themes of the spoken word including a continuation of our seeking the mind of Christ, the ministry of the Holy Spirit to our soul, being under confinement by God, overcoming our troubles and nature like Jacob, and overcoming foolishness. The final word by Brother Chijioke was a challenge to daily feed upon the word for the strength of our soul and our Christian walk. 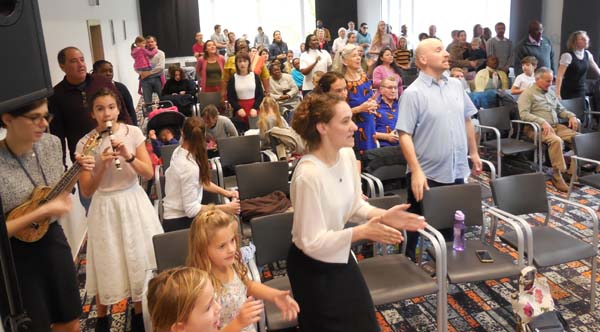 Visitors came from many countries besides the four fellowships in the Czech Republic: including Sierra Leone (sister now stationed in Goma), Nigeria, Togo, United Kingdom, Switzerland, Philippines and representatives from three fellowships in the United States. It is good to see people coming with a hunger for the word of life that Jesus gave us and was further confirmed by the apostles. We are such a favored people, to have this end-time apostolic message. I believe that the desires of many are being met at these gatherings of saints. And I want to speak a blessing to each one who came seeking.

Blessings to all,
Mark