For us who traveled at this time, I believe it was a blessed time of seeking the mind of the Lord and being in fellowship with other believers of like mind. Our flights from the USA were to Prague, as we did last year, and from there we traveled by car to the other meetings. Our total length of absence from home being 3 ½ weeks.

The first conference was in Berlin, Germany. There were three cars (or vans, with families) that traveled from Prague. Other visitors came from Switzerland, Nigeria and United Kingdom (a would-be visitor from Uganda was unable to obtain a visa). We all stayed at the Bongard Hotel as we customarily did, but this time it was not near to the meeting venue, as Brother Guido was unable to obtain the place we had been using. So, except for breakfast at the hotel, our meals had to be gotten from the local “neighborhood”. It was a pleasant and clean venue, but we did not seem to have the same freedom or the same spirit as we had had at the other meeting place. I did not take any photographs at the German meetings. Recordings of these meetings will be available along with the Czech conference meetings when they are made available.

Our return to Prague Sunday afternoon from Berlin on October 14 left us a whole week before the actual Czech conference was to begin. We spent the time, still recovering somewhat from jet travel lag at Brother Radek and Sister Gabcha’s home in Tursko, a beautiful village west of Prague and not far from the airport. We will be dwelling in the room right next to where the Cassell’s are staying. This is our bed and we have been invited for meals at other brethren’s homes, especially with Sister Eva and her three beautiful daughters, who are very good cooks. There was a midweek meeting in which I shared from John 6 (I am the bread that came down from heaven). The time in Tursko was very pleasant, restful and passed very quickly. 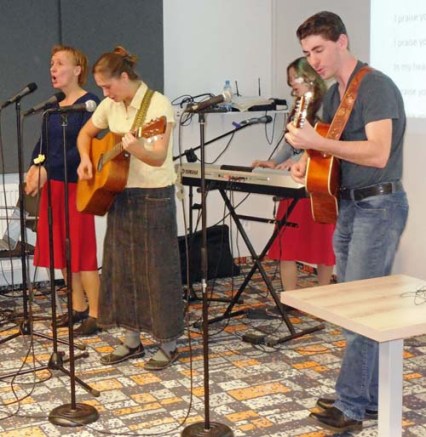 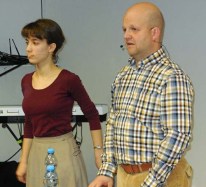 On Sunday morning, October 21, it was time to leave for the week-long conference in Kraskov, about a two-hour drive west of Prague. We met here last year also, in a very nicely renovated hotel and were assigned to the same room we had last year. Our room overlooks a nearby lake which is literally translated to English as “Lower Hell Lake”; the feeder lake in the village just east, must be the Upper. I’m not sure where it got the name, but we don’t intend to permit any of hell to have a part of these meetings. There will be two set meetings each day, morning and evening, with much unscheduled meeting and fellowship in between.

Without giving the title of each speaker’s word, I will just for now, summarize the theme of what I believe is being said. Brother Burt’s messages were directing our attention from the horizontal plane and focusing us to the vertical, setting our life and passion toward God and His kingdom. He also delivered a prophetic word to certain individuals, at one time anointing and praying for all of the young people who are being exposed to the world’s educational system, either lower grades or college. And there are nearly a dozen Czech youth who are in their late teens through early 20s. 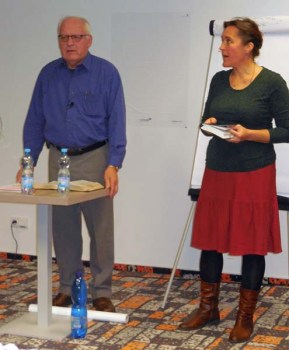 My messages were a continuation of the exposure of the Babylon Harlot False Church system, that I began in our home fellowship. This word is to show God’s people, especially our youth, how to avoid the snares of becoming intoxicated by the wine of her fornication. There were 2 afternoons in which I held Q and A sessions.

Brother Jim spoke twice, on brotherly love and hearing the voice of God. We were also blessed to hear from Brother Val, who came from Florida. Brother Ikey, now from Luton, blessed us with a message on those who had encounters with God. And Brother Martin gave much practical teaching on casting down Satan and again from 2 Peter 1. The Klusons had to leave us for a couple of days due to the sudden death of Kristyna’s father.

The grandest of afternoon sessions was held on Tuesday, when the children/youth presented a truly regal benefit concert. I hope that some of these photos can accompany this report. Its purpose was to raise money for the support of the KMM School in the Philippines. Each attendee was to donate as each willed; it was surely worth twice what we might have paid. We understand that they raised $805. Well done! Well done!

So, on Sunday afternoon, October 28, it was again time to pack up and make the 2-hour drive back to the Prague area. Back in Tursko, we again enjoyed the most gracious accommodation at Radek and Gabcha’s home. Very early Tuesday morning Radek drove us to the airport and much later the same day, 4000 miles to the west, Rita and I returned to our home, quite well but ready now to rest from the other side of jet lag.

We extend a heartfelt thanks to all who prayed for and encouraged us. Many blessings to you, each and every one.