The team this year is quite small, in comparison to some of the visits we have made in the past. Rita and I left our home airport in New York State at 6 AM on Tuesday, June 20 and we met Brother Burt Asbill in Detroit, who left his home airport in Texas at about the same time. From there we traveled on to Manila together, where we stayed overnight at a hotel near the International Airport. The next day, in the early afternoon, we flew the 90 minute flight south to Butuan on Mindanao Island.

If you have been keeping up on the international news, you will know that all of Mindanao Island has been placed under martial law for 60 days from sometime in late May when a Muslim terrorist group attacked the Mindanao city of Marawi, (population 264,000, many of whom are Muslims and have fled to a refugee center of Ilagan, north of the city). Marawi is about a 5-6 hour drive south west of Butuan, where we are staying. The government claims that they have the rebels cornered and are in the process of driving them out (including bombing the city with airplanes). In the meanwhile, the very day that we landed in Manila, another splinter Muslim group attacked a small town of Pigkawayan south of Marawi, but was repelled by government troops. In their retreat, the rebels took refuge in a school and also took hostages. So the situation is still not at all settled. Because of this, we have changed our usual schedule, by not traveling out to any of the outlying fellowships that we usually visit; but rather, having them come to us. We will be staying at our usual hotel and traveling by day only to the KMMS School.

Our Thursday arrival in Butuan went smoothly, where we were met by brethren and taken to the hotel. We did not notice any unusual security thus far in the city. The next morning (Friday), we were taken to the school in our hired van. On the way, we were stopped by one police road check where the officer looked carefully at the passengers. On the street just outside of the school parking spot, there were two police officers with bright yellow jackets; I have never seen them here before, but maybe there was just a traffic issue. They were not there on Saturday.

At the school, we were all given a very warm welcome serenade upon our entry, where we met the entire staff, including 9 new employees (8 teachers and 1 maintenance man). The school building itself has just undergone a very thorough renovation to rid it of termite infested structural beams and support pillars. We had a general talk with the teachers about our mission, vision and philosophy of the school. Then Rita and I met individually with each of the new employees to learn who they were. It was a very rewarding time and we are quite pleased to hear their enthusiasm for teaching Christian principles to the students. We wrote a brief profile about each one and also photographed them and will soon make a report available.

We scheduled the elder’s meeting for our first Saturday, another departure from our usual schedule. We were picked up at 9:30 and driven to the school. On the way to the school, we were stopped at the same checkpoint as yesterday. But on the return to our hotel we were stopped twice at checkpoints manned by the military in camouflage uniforms and carrying fully ready weapons; it was actually a comfort to be stopped, knowing that they are on the alert for terrorist rebels. It was a good meeting with the brethren. Burt spoke on Perfection in Christ and I spoke on Our Calling and Election.

On Sunday, we have only one meeting at the school at 1 PM. It is a combination meeting of the local fellowship of Br Lito and the Sunday afternoon group of mostly school people who meet here. The meeting began with a brief praise and worship and then each of the new teachers took the opportunity to share their “testimony” of how they came to be employed here and their desire to serve God in their calling here as a teacher. It was a blessing to hear them; it seems that we are going to be very fortunate to have this team of educators. 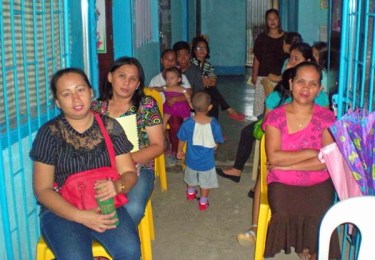 After the teachers shared, I was invited to speak. I brought a word defining what the kingdom of God really is. I had no more begun to speak than the heavens opened up and we had a torrential downpour, which lasted nearly an hour. The rain was so heavy and lasted so long that I could not even hear myself speak as the rain descended on the metal roof. I am so glad that we authorized the repair of this roof over the summer break time. It wasn’t perfect; but it surely protected us. There was a large crowd of over 100 people; some had to sit inside the corridor of the school. After the meeting, we gave an invitation for repentance and most of the audience came forward for prayer. After the meeting, we were surprised again by the “cornucopia” of fruit that the parents gave the ministry team, far more that we could ever eat here.  By the time the meeting was over, the rain had stopped; although the roadside gutters were full, we were able to safely return to the hotel. It was a good day and we praise the Lord. 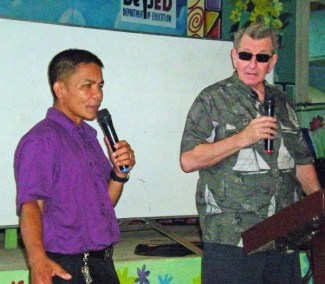 Monday was the beginning of a three day conference at the Karaga Hotel. This meeting was mainly for the benefit of the Bible School in Jabonga, about an hour’s drive north of here. We were happy to also see Brother Ben and his wife and a few others at the meeting. The room was full, as these young families are also bringing forth young children. Brother Burt spoke first on the subject of The Beast of our Lifestyle. I spoke in the afternoon on Encountering the Gate. We were also able to distribute some clothes for toddlers and young male adolescents, which was very much appreciated.

Tuesday was a continuation of the previous day. Brother Burt spoke on the Wife of the Lamb being made ready. There was a lively discussion and questions after he finished speaking. I continued the tabernacle journey from the outer gate to the next barrier, the door, which is Jesus Christ. Wednesday was much like the day before. Today Burt spoke on a quite full description of the door of the Tabernacle. I spoke in the afternoon about Christ the door being closed to the Holy Place at a certain time that is soon coming to pass. My assessment of these meetings was very good; I don’t believe we were ever able to teach in the depth and height of spiritual principles as we were able to this time. And the feedback that we got was that it is being received.

On Friday, we returned to the KMMS for a meeting with their local Board of Directors. In the afternoon, Rita and I visited each classroom and made a photo of the class in session with their teacher.

Saturday was a quiet day of some rest as we began to contemplate our return home. We have not encountered any more road checkpoint activity since our first few days. We have been following the local newspaper in the war activity in Marawi. It seems that the army claims that they have the IS motivated rebel insurgents cornered to a very small area in the city. It seems that the US has sent some advisory troops and some aircraft to help the government. And the Philippine president is now making promises of rebuilding the city; so it would appear that the end is near. The weather continues to be typical for here. The days are hot and humid; it often rains in the late afternoon or evening.

Sunday (July 2) at the school, was our last day of ministry. Rita was asked by Rosalia to assist in leading the praise and worship, which was very anointed. I saw several of the women wiping tears during the final worship song. Then the teaching staff shared a song (This is My Desire, not the version we sing) with the group, again a very beautiful song. Finally, it was a good atmosphere for Brother Burt to bring the final word on The Way to Mount Zion. The room was again very full; I believe that 100 chairs were filled.

It is Monday now as I sit in our hotel room in Manila, where we wait for tomorrow’s long day of flying back to our homes in the States. We are in agreement that this was a very profitable ministry encounter with the brethren. We are also very pleased with what we see of this new teaching staff, as they begin another school year with their pupils. God has surely blessed us with this staff.

Again we want to recognize our faithful sponsors and prayer helpers for making all of this possible. Let us continue to trust God as we see the economy beginning to tighten up for this kind of charitable giving.

May God bless each one of you,
Mark and Rita Jantzi, with Burt Asbill