The actual travel to the Philippines from my home in Upstate New York went without any significant interruption. It was the usual 26 hours of travel time to arrive in Manila, in which I really am not able to sleep. Probably the greater challenge for me was the two major snowstorms that left me abundant snow, the second one which ended only hours before my departure from home. The challenge is that I like to have a clear driveway that I can return home to. And Rita just happens to be in Iowa, welcoming the birth of a new grandson. So she will need a clear driveway since she will be returning home before I do. 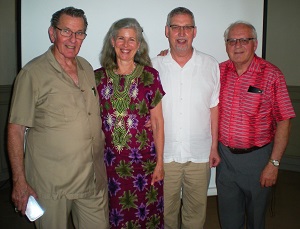 The team this year includes the Asbills, Brother George Herrig and myself. So after an overnight in Manila, we take a 100 minute flight South to Butuan City on Mindanao Island. As we are approaching for the landing, I can see the wet streets and a considerable amount of standing water; it seems that the wet season is still quite active. We were met at the airport by Sister Merlinda and a few of the brethren that we have been working with. Perkin, the hotel owner, was also there with his van to help transport us to the hotel. Since it was already late in the afternoon, after we had a little fellowship with the brethren, we had our evening meal at the hotel and then went to our rooms to begin the jet lag adjustment, which for the brethren from Central Standard Time, is a 14 hour time shift.

So, the next day is Friday and we had planned to go to the KMM School to meet with the children. But we have learned that because of the excessive water, the children will not be having school. In fact, we were later informed that the local government has ordered the closure of all schools for two days, public and private, because of the water. We are told that our school did not suffer actual water damage this time, but the yard is full of water. So we had a staff meeting in the large room at the Karaga Hotel. All of the teachers and administrative staff joined us. It was at this meeting that we learned that some of our teaching staff are making plans to leave us at the end of the school term in one month. It seems that the public school system has been infused with new money (their pay is also higher) and they plan to hire more teachers.

Saturday was to be a free day; but in the morning we went to a couple of locations near to the present school to look at other building options that might serve our future needs as a school location. Nothing was open, so we could only look at the outside. Later, we visited the mall. It continues to rain a little every day, but not the typhoon type that can cause sudden flooding of all the streets in the city.

On Sunday morning, I rode out with Sister Merlinda in our rented van to minister at the fellowship of Brother Ben. If you remember my description of this road from the last visit, you will understand that with the excess of water on the road, this presented a special challenge for our driver. It took an hour to travel to this fellowship; the last 12 miles required 40 minutes. I spoke on the spirit of slumber and the brethren seemed to really appreciate the word. Afterward, we were served a good lunch at Brother Ben’s house before returning to the hotel. At 3 PM we were taken to the KMM School for a meeting with the parents and their children. Brother George spoke from John 16, “I am the true vine”. 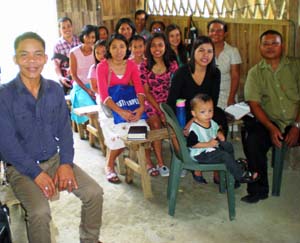 Monday begins a three day conference at the hotel specifically to minister to the bible school, overseen by Bro Edmar and Sis Medlyn in Jabonga. They were able to bring three vehicles of students, staff and families to the hotel, for which we will feed 50 lunch meals each of the three days. The students take the initiative of opening the meeting with the songs and praise. It is so refreshing to hear the quality of the praise and worship and to see them enter in to the Spirit so quickly. In addition to the students, several local elders are also present and partaking of the meetings. Brother Burt gave the morning and afternoon messages, speaking of the changes the Lord is working in his sons to make us like Christ.

On Tuesday, the students are back again and ready to start at 10:00 AM. Many of the former students which are still affiliated with the school are now young married couples and nearly a dozen babies, toddlers and young children are part of this family. Sister Nancy gave a brief lesson and song to the young ones before the meeting. After this, Brother George spoke on being changed from glory to glory. After lunch, I spoke on some examples that we have of understanding spiritual things from the tabernacle. All of the visitors had left the hotel by 3 PM, yet there remained much more business for us to transact this afternoon.

On Wednesday morning, after a short time of praise, I picked up on the word I had begun yesterday, again showing the beginning of the plan for our salvation as seen in the tabernacle. It was the same group again, mostly from the Bible School in Jabonga. In the afternoon, Brother Burt finished the mini-conference with a word about how God is helping us fight the war against out biggest enemy, our self. We were also apprised of the progress that the school is making to translate The Pattern into Cebuano. All in all, it has been a good time with the school and I believe the kingdom message is being assimilated and comprehended. It is good to know that there will be a witness of this end time truth here in the Philippines.

Thursday, February 23, will not be much of a day of ministry, but mostly a day spent doing business for the KMM School. In the course of the day, we will visit three local banks in order to transact the business that will facilitate the operation of the financial business of the school. There was ministry to the children by Sister Nancy, a session for each the morning and afternoon group. It has been quite a rainy day and by afternoon we can see motor vehicles sloshing through water in the low parts of the city streets. 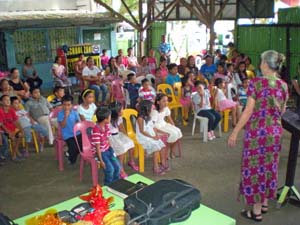 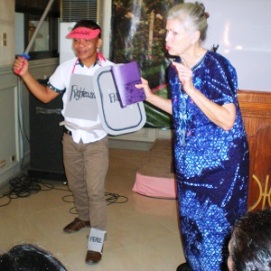 Friday was a dryer day, mostly spent doing business, such as work that has to be done to maintain the current standards of our school banking accounts and certain changes that have to be made. On Saturday, there was still a remnant of business left to be done before our departure early Monday; but before noon it was all accomplished. We also held a meeting at the KMM School with the local elders, in which I brought the morning message from Matthew 13 and Mark 4 on the soul’s receptivity to the sowing of the word and the human response. In the afternoon, Brother Burt brought a word that I would call: Don’t Make a Hybrid of the Kingdom Message.

Sunday, February 26, was our last day of ministry. We went in the morning to Brother Lito’s fellowship where I brought the word on the Midnight Bride. The fellowship fed us a lunch and then we went back to the hotel. At about 2:30 PM, we traveled back to the KMMS where a fellowship meeting was held with the students and their parents. Brother Burt spoke on our being fearfully and wonderfully made in God’s own image. We were very surprised with the gift of much native fruit from the parents to the ministry, so much more than we can possibly eat. It has not rained for the past two days and I can tell that the Agusan River appears to be down about 3 feet from the high mark.

On Monday morning it is raining again in Butuan; apparently the wet season has not quite ended. We leave the hotel early and fly to Manila, where we will spend the night and then board a flight that will return us back to our homes; due to layovers in the US, this journey will take about 32 hours until we are safely in our homes. We thank the Lord for His watchful care over us and the anointing on His precious word. None of us took any sickness of any kind on this trip. We are so aware of the prayers of those who have stayed behind and held up our hands. We thank you and may God bless you abundantly.

This entry was posted in Philippines. Bookmark the permalink.
Loading Comments...