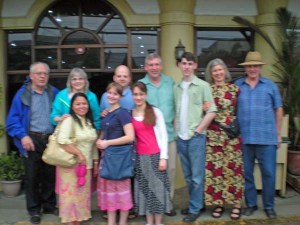 Our travel from New York to the Philippines this year was again to be a great contrast of weather extremes. The night before our 6:00 AM departure (Tuesday, February 17) from Albany, NY, we had a temperature of -20F following another snow storm. But the Philippines has its usual tropical warm comfort, not yet really too hot. Our travel was the usual 24 hour ordeal from one end to the other, with one of the legs a 14 hour flight from Atlanta to Japan. For our brief overnight in Manila, we tried out a different hotel very near the new airport, which the international flights are now using regularly. Passport control and customs went very smoothly in this new airport. The next day, about noon, we were back at the domestic side of the airport to board our flight to Butuan City. Landing in Butuan, after about a 90 minute flight, we were met by the brethren and two vans to carry us and our luggage to the hotel. Our team mates this trip include: Burt and Nancy Asbill, George Herrig with grandson Josiah Asbill, Martin Kluson with daughter Kristyna and Lucy Kotrlova with Rita and myself. 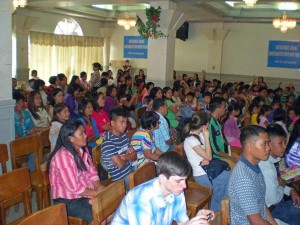 This will be our 8th year that we have stayed at the Karaga Hotel, which is of course our 8th year of ministry here in this area. This hotel will be hosting our three day conference, morning and afternoon, six meetings total. The first day, the Friday meeting, we had a record of 240 people in attendance, which we fed at lunch with a very simple rice and small piece of chicken meal. Since there was no school today, we had 120 students plus the parents and school staff in attendance. Sister Nancy gave a teaching for the children in the morning and then Brother Burt brought a word about Overcoming the Enemy Within. In the afternoon, I spoke on “This Gospel of the Kingdom”, a word that Jesus spoke in Matthew 24:14.

The second day of conference went very much like the first but with a slightly smaller crowd, 185 total of which 80 are students (children). Sr Nancy again gave a teaching to the children and then Br Martin brought the morning word about having our New Name. After this meeting, Br Burt asked those who wanted a new nature to come for prayer at which a great portion of the adults responded by coming forward for prayer. The afternoon message, Ye Must be Born Again, was given by Br George. After this an invitation for salvation was given in which about 14 adults responded, most of who were mothers of school children. A young couple also came forward and asked for the baptism of the Holy Spirit. 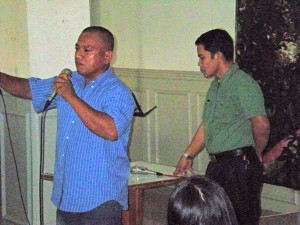 The third and final day of the conference drew about the same size crowd. I gave the second part of the message, “This Gospel of the Kingdom”. Br Burt followed in the afternoon speaking about Being Changed into His Likeness. After the word, people were given a chance to share their testimonies, which was very encouraging to hear what they had received. One couple in particular shared how they had come out of Islam and are now followers of Jesus Christ. Another man shared how he had been in our conference 8 years ago and when he saw the sign outside the hotel, came in with his wife and was glad to join us again.

On Monday the 23rd we traveled in our newly rented van about an hour’s drive north to the bible school at Jabonga, where we held two meetings. Br Burt shared in the morning on the Gospel of Perfection. I shared in the afternoon on the first part of a History of the Bible; the second part to be shared tomorrow. Since Kristyna did not feel well enough to travel, Martin stayed back with her at the hotel today; by evening she was much improved, thank God for quick healing. 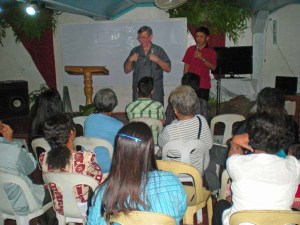 The following day Burt and I went to the bible school while the others went to the KMM School to begin school evaluations and other duties. I finished my second part of the word on the History of the Bible and Burt spoke on the Nature of Perdition. We are again finding a very receptive atmosphere at the bible school. The number of new students this year is quite diminished, especially since the local pastors have spread the rumors that these brethren are a cult, a reputation they seem to have gained since they began accepting the kingdom message; it became known that they were not training future pastors and they gave up the drums and “Christian Rock” type of music in their worship. But the youth are also learning trade skills such as sewing and welding. Brother Edmar said that they have already taken on some small contracts for iron mongering (fabricating gates and such). He said that he was able to get most of the young men certified (by the state) as welders. Some of the young people who were students several years ago have now joined the teaching staff (a part time job), have married some of the young sisters and are starting families, certainly a beautiful foundation for a spiritually healthy fellowship. We are pleased to continue our support for this work. 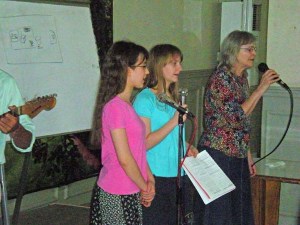 On Wednesday, Brs George and Martin were able to join us at the bible school along with the 3 young people. George spoke on God’s Order for the Church and Martin shared the afternoon word on God’s Plan for our Life. Each of the three young people also shared a brief testimony with the audience. While the work of a formal bible school may not be as full as it once was, Edmar and his wife Medlyn have been traveling down to Butuan several times a week and have been conducting bible studies, using the Pattern as a foundation. One of the weeknight meetings is at Sr Merlinda’s home, Mermelade. They are also teaching the parents at the KMMS fellowship that meet Sunday afternoon at the school. 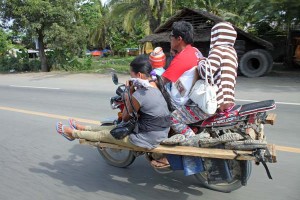 On Thursday, we have no speaking engagements but there is much activity at the children’s school. For one thing, brethren joined me to begin a negotiation with the landlord for a new 3 year lease of the property we have been using, the remnant of an old privately owned hospital. Since we continue to grow, adding a grade each year, we continue to outgrow the space in the original building. So we believe that we are going to be able to acquire the entire first floor of the neighboring building, but at a substantial increase of the monthly lease. Let us pray that God will supply all of our needs for this operation. This school has been the means, not only of giving an education to many children who would not have had any opportunity to attend school, but they have also learned the word of God and many of their parents have come to a saving knowledge of Jesus Christ and have the opportunity to fellowship regularly under the preaching of a true word.

Friday was again a busy day at the school for Martin, George, Nancy and the young people. The two young sisters from Prague, Kristyna and Lucy have now spent several days giving eye-sight screening tests to all of the students. We were quite pleased to find that out of the 146 sutdents that were tested only three needed to be referred to a local optometrist and were found to be in need of eyeglasses, which we were able to supply before we left. We were also able to follow-up on the new KJV/Cebuano Bible project that we had left unfinished when we had left in July of last year. They have now all been delivered to the school and about half of them have already been distributed to those in need, each family at the school having an opportunity to have one along with many poor brethren out in the local fellowships. The remaining bibles we will be keeping in reserve for future needs.

On Saturday, we had two meetings at the school with the local elders. Martin spoke first on the True Motivation of an Elder. After lunch, we opened it up for questions and there seemed to be a lot of interest in the question of rapture. I went through the word including Daniel, Matthew, Luke and Thessalonians. A clear case was made and it seemed to be well understood. On Sunday there were two meetings. The morning meeting was at Br Lito’s home fellowship, about a 10 minute drive from the school. Br Burt spoke on Man in God, Doing His Business. After lunch and a brief rest at the hotel, we went to the fellowship at the school where Br George spoke on Our Relationship with God.  These recordings are available if anyone is interested in a copy. I am particularly grateful to Josiah Asbill in his help in editing them before submitting them to Br Gordon. I was able to take recordings of our past visits to the Philippine brethren and distribute as there is a desire; these also have an interpreter in the Cebuano tongue although most can understand some English. 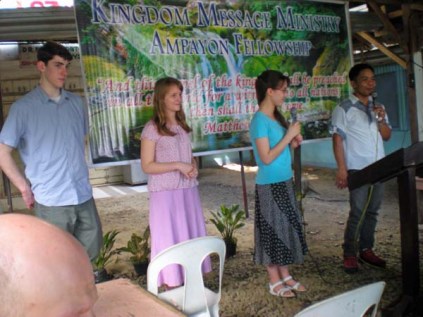 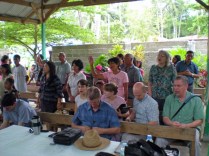 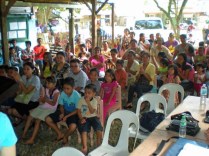 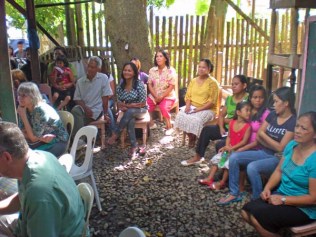 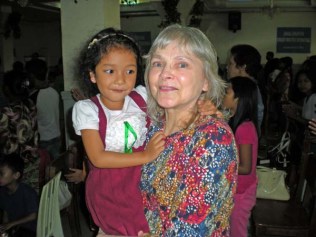 Monday began our return trip home with the first flight to Manila. On Tuesday we made the very long journey home again. All went well except there was a small delay in our last flight from Detroit to Albany. When Br John picked us up, there had been a snow event and the roads were slick with fresh icy slush (welcome back to winter). We got to our home a few minutes before midnight, quite weary, I might add. For me in particular, I got hit with a cold and very sore throat about a week ago. It has left my ears plugged and difficulty hearing. But it must give way to the healing hand of Jesus Christ. We appreciate all who have given and prayed for us and for this mission. Rita and I would even appreciate hearing from anyone who has anything to share concerning what I have written here. May God bless each one of you.

Mark and Rita Jantzi with the rest of the team