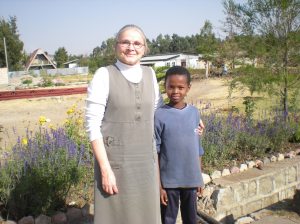 We will be staying at a rented house with Bro. and Sis. Burt and Nancy in a completely new area of the city from any previous visit. We can already sense the mile high plus elevation and the temperatures here are cool (especially at night), but not nearly as cold as New York. The times of sunrise and sunset seem to never change here, 6 AM and 6 PM respectively. Our bedroom window faces the east and I believe it is a tad warmer than the rest of the house. This is a fairly upscale neighborhood that will probably become a gated community when it is all finished. There are many unfinished houses in the area. Just next to this community, only a short walk across a small vacant lot there is a completely different scale of community, a row (or street) lined on both sides with tiny kiosk type, corrugated sheet metal shops, selling everything from vegetables, cell phone service, clothes (shoes), hardware, Pepsi cafes, to chat (a leafy narcotic type material that mid eastern men like to chew) dealers. Two wheel horse drawn taxis are lined up on the one side of the street waiting to take wealthier local customers back and forth to their homes. Donkeys carrying little burdens seem to be everywhere. This little area did not feel quite as safe for us to be taking our frequent walks. We came back to this road and neighborhood another day and I couldn’t help but thinking, “Are we in some village in Yemen”? Security is always foremost a consideration of all that we do and where we go, something that we in America do not much concern ourselves about, but that may be about to change in these last days. Just a few days ago someone unsuccessfully attempted to pick my pockets on a busy street while we were shopping with Nancy and Jemal. 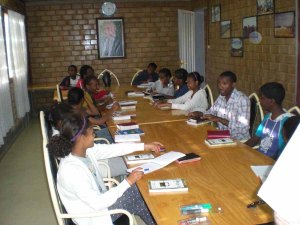 The next day (Wednesday) at mid-afternoon we are taken to the Selam Children’s Village, a large orphanage about 10 minutes drive in our rented van, driven by Bro. Fikre (who was once a taxi driver and now again needs a job). Burt and I are taken to one meeting room where we will minister to teen agers and Nancy and Rita are taken to another building where they will minister to much younger children. A young employee social worker is the interpreter for the younger children. Bro. Jemal is the interpreter for the teenagers but a young employee, Samuel is also with our group. Burt is laying foundational teaching to these young people and they seem to be understanding. It seems that none of the young ones can really speak or understand English.

On Thursday afternoon we are taken to a hotel where I attempt to use the internet. We’d like to check up on Rita’s family in Iowa, where it seems that most of them (mother, two daughters and a granddaughter giving birth) have been in the hospital this week. The internet and the computer are both acting up and this doesn’t go too well for me today. By late afternoon we are taken to Jemal’s “new” house where a bible study is held once a week.  Jemal has been living here with his wife and two daughters since August. The house is one of about ten in a compound surrounded by a sheet metal barricade, each one separated by small rough stone lined labyrinth of alleyways. The house is made up of three rooms, a bedroom, a living room (about 9’ x 9’ where about 8-10 of us gather for the meeting) and a smaller kitchen. He says they are quite pleased with the house except for the fact that there is no toilet, only an outdoor communal tin shack with a hole in the ground. There is also a common spigot near the entrance where the women of the “compound” gather the water they need in pails and carry it to their home. Jemal said that he hopes this will not be permanent and that someday they will be able to move up another notch. It was my turn to teach so I brought the parable of the 10 virgins. It evoked a lively discussion in Amharic and we do not understand everything that was said. 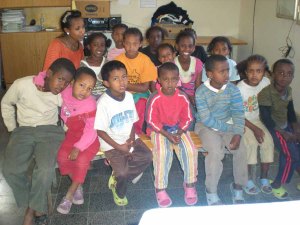 Little Ones in Salem’s Village

On Friday, after having a very special lunch made by the women at Fikre’s house, we again went to the orphanage to teach the children. The invitation of the late founder’s daughter is I believe, the reason the Asbills are here at this time. I have been asked to teach the older youth today so I bring a word on the history of the blood as it will apply to the brazen alter. The youth are beginning to open up more with questions after the teaching. The meetings at the orphanage will be on Monday, Wednesday and Friday for at least a two week period. The regular ongoing meetings at the two elder’s homes are Thursday at Jemal’s and Saturday at Fikre’s.

Saturday, January 19 seems to be the midst of a three day holiday for the Coptic Church; in fact it envelops the whole of the city. There are a number of Coptic Churches in the city; Jemal believes hundreds, some of which are large dome shaped structures. Their “pope” (or chief bishop) died last year and he has not yet been replaced; we are told that the Egyptian bishop has been filling in for the office, trying to make peace and reconciliation between the two Coptic Orthodox groups. So again today many main roads are blocked off so that our van has to take certain rough side streets and alleys. From our window we can see a great Coptic parade procession walking down the main road. People are dressed in their finest clothes, many women wearing traditional long white flowing dresses with ample white scarves; many men also wearing white. The people are shouting, singing, beating drums and carrying flags as they go. Each church seems to have their own parade. Jemal tells us that they are celebrating Epiphany, which seems to be about 12 days later than the Roman Catholic holiday. We finish the day with a bible study at Fikre’s house, then a quick stop at a nearby hotel to download our email before returning home. Jemal tells us that in his neighborhood the partying went on well into the night with singing, dancing and heavy drinking.  A church festival? Where did this come from? The encyclopedia article I once read said that this had origins with people along the Nile drawing water from the river which was then saved for a whole year and used by their priests for their heathen anointing and “baptism” rituals. The Roman Catholic Church has claimed this “holy day” and proclaimed it to be the day that Jesus was “reborn” by being baptized in the Jordan by John. See how easily a pagan ritual becomes a “Christian” tradition. The heathen want to have a party so let’s give it a new Christian name; this was the policy of Pope Gregory given to the missionaries. These are the kinds of religious strongholds in the souls of men that must be broken down by the word of God’s truth, in order for the true kingdom of God to come in.  A little later in the week the Muslims are celebrating the birthday of Mohammed.

On Tuesday of the second week we all went to the airport neighborhood where tickets were purchased from Ethiopian Airways for Asbills and a few of the brethren to travel to Gondar in Northern Ethiopia for the weekend of February 8-10. This is being done at the invitation of a group of Messianic Jewish people who have heard some of the message and want to hear more of the Kingdom Word. By Wednesday we were in the usual routines including the ministry at the Selam Children’s Village. They had only given the Asbills a commitment of two weeks with the children, but at the Friday meeting the teens told us that they would like to extend the time yet another week. The group size had shrunk from 14 to 7 but these were the ones seeking answers to serious questions. 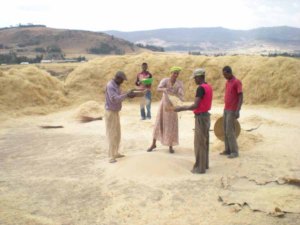 One day in our walking we came across some farmers thrashing out (separating) the grain of teft from the straw by using 8 or 10 cows to trample it on a threshing floor. There are many piles of straw in the fields around us which Jemal says is teft.  Later that day while riding in the van, we saw 3 men in a field winnowing the teft in the manner used in the bible times. One man would throw the grain in the air with a winnowing shovel and 2 others fanned it, each with a large skin winnowing fan, separating the chaff (which the wind bloweth away) from the grain. Isn’t that what the Lord is doing with our lives and his church, running us through a customized thrashing process? The next day we saw a group of workers in the field near our house sifting the tiny grain with a sieve. From this they make enjara, the flat flexible “bread” used in eating a meal with the hands and silverware is not needed.

Thursday afternoon was another home bible study at Jemal’s, where I brought a word on spiritual warfare. It is a real joy and such an encouragement to see the eyes of some of the hearers opened up as they understand what the mysteries of the kingdom are all about, as one man exclaimed after the meeting.  It was a rare pleasure to have Sister Beri spend Thursday night with us as she was in transit from Uganda to Nigeria. Her flight continued again on Friday morning. 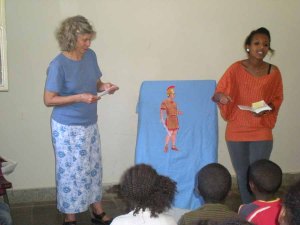 On Saturday we were given word that the other orphanage, Selam Children’s Village #2 is interested in having meetings with children also. Saturday the house meeting was held at Fikre’s.  About 12 of us gathered as I spoke on Sonship and also talked about the church in the home. There was a discussion and questions that went on for nearly an hour afterwards. It ended with a request to have more meetings to explain this Kingdom Message in more detail to them. I believe that Bro. Burt will be busier after we leave on Tuesday. Fikre also told me that his wife sent word for him to tell us that she is understanding and appreciating the word.

After a Sunday fellowship meeting at Jemal’s house and a couple more meetings at Selam Village on Monday, our time here is coming to an end. Religious tradition has had a strong grip on the people of Ethiopia; much of it is a substitute for the truth. With continual persistent planting and watering we are beginning to see hope for the establishment of a people who are preaching the end time message and are moving on to sonship. This is not the time to take a break or to become distracted by other things. Let us pray for the vision that the Asbills have been given for this land and let us pray for their strength to endure in the face of the enemy’s continuing assaults.

Love and blessing to all of you,
Mark and Rita Jantzi

This entry was posted in Ethiopia. Bookmark the permalink.