The conference this year was held in a new location, in the mountainous region of northeastern Moravia at the Horizont Hotel in the village of Kuncice pod Ondrejnikem, a very beautiful location about a five hour drive (that includes a leisurely rest stop) from Prague. After staying nearly a week after the German conference in the village of Tursko (near to Prague), we left on Sunday morning, October 21 with Czech brethren in a split cavalcade of five cars. There must have been again that many brethren coming from the Prague area and possibly that many family groups attending from Moravia. Couples and individuals also came from Switzerland, Germany and the United States. The meetings here will be for one week, being well attended by our known Czech brethren. The main meetings are morning and evening but there seems to always be an extra mid afternoon meeting as well. It is such a blessing to see so many young families with full quivers of young God-fearing and obedient children. When we first came to Czech in the early 1990’s these parents were themselves very young and mostly not yet married. But over a 20 year period there has been steady growth and maturity of the fellowship(s). A new fellowship is also taking root with Tomas and Magda in the region of which we are meeting for this conference.

The first day of the meeting started out with a German word “durchchnitt” which was given to one of the Czech sisters. The internet definition of the word means: “To be average, to be an average person and to be the mean or the majority.” This seems to have been a warning to the body of Christ to rise up higher than the lukewarmness of mediocrity if we intend to be overcomers. We were also warned of the dangers of appeasement insofar as our dealing with the enemy, Satan. The disastrous results of the pre-world war 2 policy of British PM Chamberlain in dealing with Hitler and Germany are an example. This could be contrasted with President Regan’s policy of non-appeasement toward the USSR in eventually ending the cold war. We as Christians likewise cannot appease the devil but must continually engage him to his ultimate defeat.

So as the conference progressed, we heard more and more about spiritual warfare. The words from Revelation 12: 7-8 kept coming back to us:

8 And prevailed not; neither was their place found any more in heaven.

9 And the great dragon was cast out, that old serpent, called the Devil, and Satan, which deceiveth the whole world: he was cast out into the earth, and his angels were cast out with him. 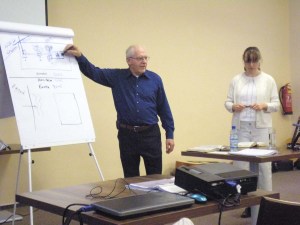 In such a war we are currently engaged. It is not just something happening in some faraway place in the sky, but right down here in our earth and in the heaven (spiritual place) of our soul. We are not only being required to overcome in our own soul, but to rise up in higher spiritual places to fight the enemy in our prayer as Daniel did in his day. One only needs to look at today’s news to see the beginning of the last phase of this great spiritual battle that will culminate in the kingdoms of this world becoming the kingdom of God in their fullness. God has in his greatness chosen to share this mission with those who will be his sons, overcoming the accuser of the brethren.

Re 12:11 And they overcame him by the blood of the Lamb, and by the word of their testimony; and they loved not their lives unto the death.

Our return trip home gave further evidence of the instability that is erupting in our world. We saw that the hurricane Sandy was tracking to travel directly across the center of New   York State. We prayed, “Lord, please either slow this storm or turn it aside so that we can safely return to our home.” After the storm made landfall in the New York City/New Jersey shores it took a sudden left (west) turn across Pennsylvania and West Virginia, missing most of Upstate New York (we live about 200 miles north of New York City). After we landed in Detroit, we still had to spend an extra night there because they had cancelled all other flights to our state as a precaution. But we were put on the next flight to Albany on Tuesday morning. Aside from a lost piece of luggage, which arrived two days later, there was no other incident. But we give praise to our Lord for keeping and protecting his servants on this journey. And we thank each one of you for the prayers you sent in our behalf. I believe they were all answered. God bless you.

PS Some of the audio recordings of this conference are already uploaded to this web site; others are available at http://share.ptms.cz.